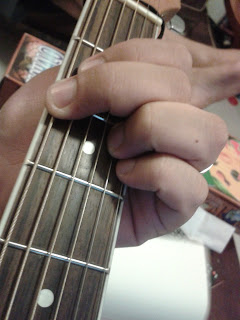 It's been a while I had my own guitar. Translation: NEVER. Which may surprise some people since I've been playing guitar since high school. The guitars that I use are often borrowed from friends. We did have a classical guitar at home but since I didn't buy it, or given to me, it wasn't really mine. Besides, I never really liked the large fret common in classical guitars.

I learned how to play the bass using my friend's guitar when I was in college and when I finally had money to buy one, I bought one in Raon (Manila). Buying an acoustic guitar never became priority from then on, since I enjoyed playing my bass guitar and I still had our old family classical guitar if I really wanted to play with a 6-string.

Actually, I took that old classical guitar in our new home years ago but I rarely used it. I still hated playing it's large fret. But I played it from time to time when I felt like playing. Until Sam broke the guitar around two years ago. He broke the guitar's neck. Split it in half. After almost 20 years of service, a two year old accidentally broke it.

Two weeks ago, my wife gave me my own guitar as a late birthday present (thanks, baby!). I was really planning to buy one because we don't have guitar at home and there were times when I really felt I wanted to play one.

Finally. After many years, I finally have my own guitar.

It's a Fernando guitar (just like my bass guitar). It's not as pricey as a Yamaha or some other branded guitar but enthusiasts would agree that Fernando makes pretty mean guitars. I've had my bass since 2002 and it's still playing like it did more than 10 years ago.

I chose this guitar because it has a nice round sound. I tested some high-end guitars a few months a go and I am confident that my guitar sounds just as well as these.


We tried a few guitars at the store, but for this guitar, it love at first strum. I told my wife that this is the one I wanted because I felt like I was having an orgasm when I was strumming it hehehe. I wonder if people feel the same when when they chose their guitars.

I played it as soon as we got home. Played it for hours until I couldn't play anymore because my fingers hurt.  I even bought a song book because I've forgotten how to play a lot of songs over the years so I can play right away.


I'm really happy with this new gift. So happy that I blogged about it!

I almost fell down from my seat when I read about your "orgasm"-metaphor. Gee-whiz.

hahaha! there's no other way to describe it e :)